After our time in Singapore, it was back to Johor Bahru for a few days of family time.  As one of my Kiwanis friends likes to say, “hanging with the grand-babies”, four of them, ranging in age from 2 to 13.

Much of this time was simply spending time with the kids, camera put aside, just being grandparents.

I believe I mentioned this before, but this was an amazing experience for me, this “being a grandfather” thing.  Although Kim and I had been married for fourteen years, and she had been a grandmother for thirteen of them, this was my first meeting and interaction with her daughter Jaclyn and her children.  Kim had been there when Valen, the oldest, was born, and had visited several times and met all but the youngest, Vinc.  For me, I arrived in JB just a few short days ago, and within an hour was being called Grandfather.  Probably a good thing that the kids didn’t know about someone being putty in their hands, because that’s what I was for the first while as I got used to it.  Now I quite like it, I talk with them on Facebook and can’t wait to see them again.

Now I know that folks are familiar with being able to order food and have it delivered, like calling up and having pizza brought to your door.  And I know that many people like satay, or “meat on a stick” as some describe it.

Well, at daughter Jaclyn’s house, we did even better than putting these two things together.  We called up and had a chap come over and prepare satay right in front of the house.  It was very inexpensive and we enjoyed a grand meal of chicken satay when he was done.  As you can tell from the photos, not only did he cook some tasty satay, he provided a great show for the hungry spectators as well.

Some of you may recall a TV show with Art Linkletter called “Kid’s Say The Darndest Things”.  Well it seems that our grand kids in JB and our grand nieces and nephews in Melaka had a common thought regarding yours truly.  They said that I bore a distinct resemblance to that gentleman of KFC fame, Colonel Harland Sanders.  Now I don’t see it myself, however I guess a white guy with a white/grey beard is what did it.  So I thought I would have a bit of fun with this.

So… we took the JB extended family, including Kim’s brother, his wife and kids, to – you guessed it – KFC, for lunch.  I should mention that, in all our time in Asia, Kim and I went to a Western style eatery twice, this being one of those time (we also tried burgers in Singapore, which we did not enjoy).  The food at KFC was quite good and very little different from back home.  After the meal I then asked everyone how they had enjoyed “my chicken”, receiving a very positive response.

Our last full day in JB wrapped up with a shopping trip to one of the local malls.  The anchor store on this mall was Aeon, which is a huge conglomerate, with stores and malls throughout Malaysia, Japan, Indonesia and Viet Nam.  In addition to the fooderies and food courts in the malls, their department store has its own food court as well.  I have included a shot of this particular mall interior on the left.  As well, on the right, what evening of shopping would be complete without an ice cream. 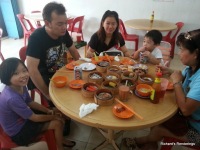 The next day we prepared to head back to Melaka after about ten days in JB and Singapore.  Two of the kids were off to school, then the rest of the family readied to drive us to the bus depot, but not before stopping for dim sum.  Kim and Vinc lead the way, then we had a fine meal to start the day.

After a wonderful visit to Johor Bahru with both family family and Kiwanis family, we hopped on the bus for the ride back to Melaka and further Malaysian Adventures.  As usual, I enjoyed the scenery during the trip, always finding something different to see.

Hope you are enjoying sharing our travels, as I am enjoying recalling them thru this blog with you.  See you back in Melaka.

Keep Up With What's Going On Around British Columbia

Live your best life now. One positive and bright Hayat.

Life with cats, and other things...

My journey through the world, and everyone’s welcome to come along.

Musings on a variety of subjects while embracing new towns